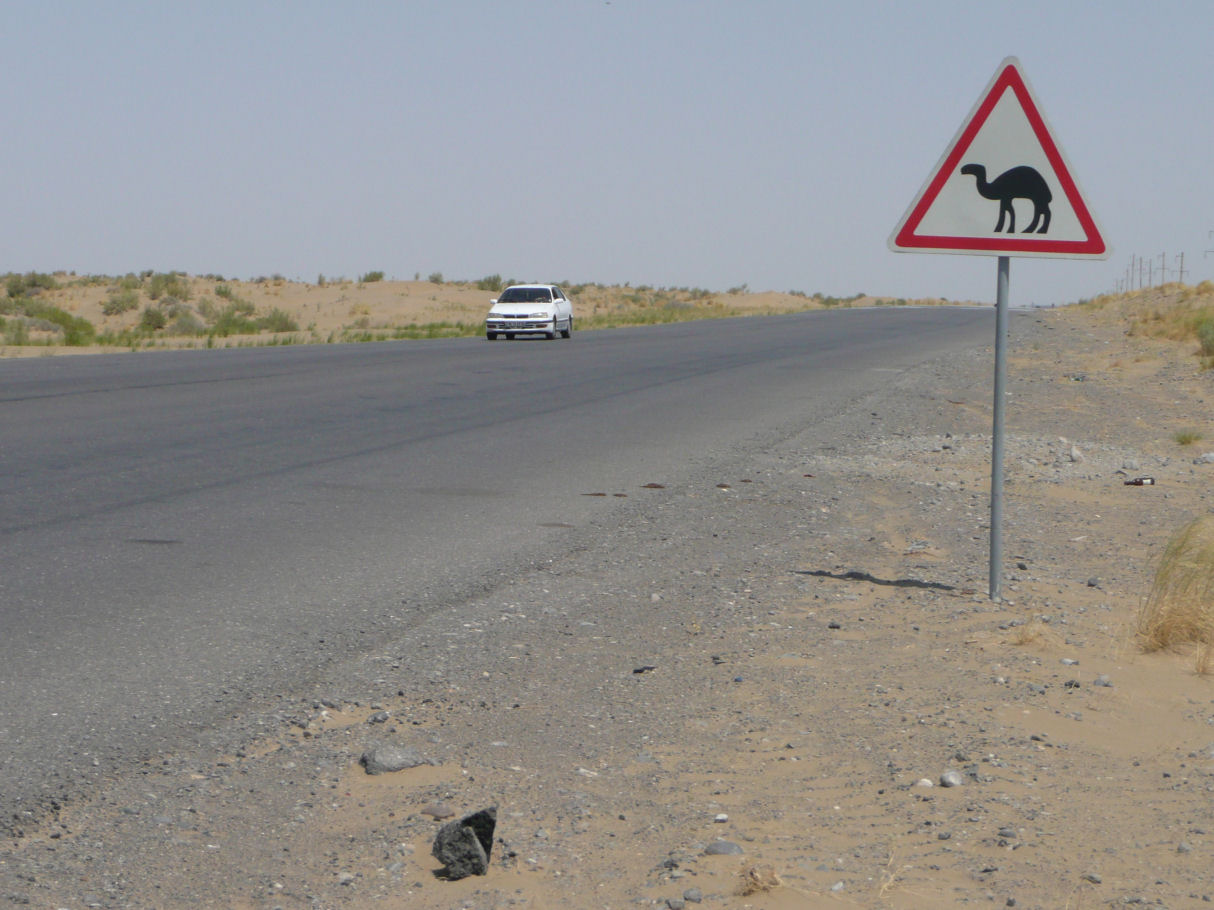 Travelling mile after mile through sand and scrub in temperatures reaching 46°C, with the odd camel for company, we finally arrived at our intended overnight stop near the Darvaza (Derweze) fire crater in the middle of the Garagum desert.  (The turning off the main road is at grid: N40.19415, E58.41329).  The area is rich in natural gas, and whilst drilling in 1971, Soviet geologists tapped into a gas-filled cavern.  Unfortunately the ground beneath the drilling rig collapsed, leaving a huge hole from which poisonous gas began escaping.  To avert an environmental catastrophe, the Soviets thought it would be a good idea to set the gas alight.  The crater hasn’t stopped burning since. 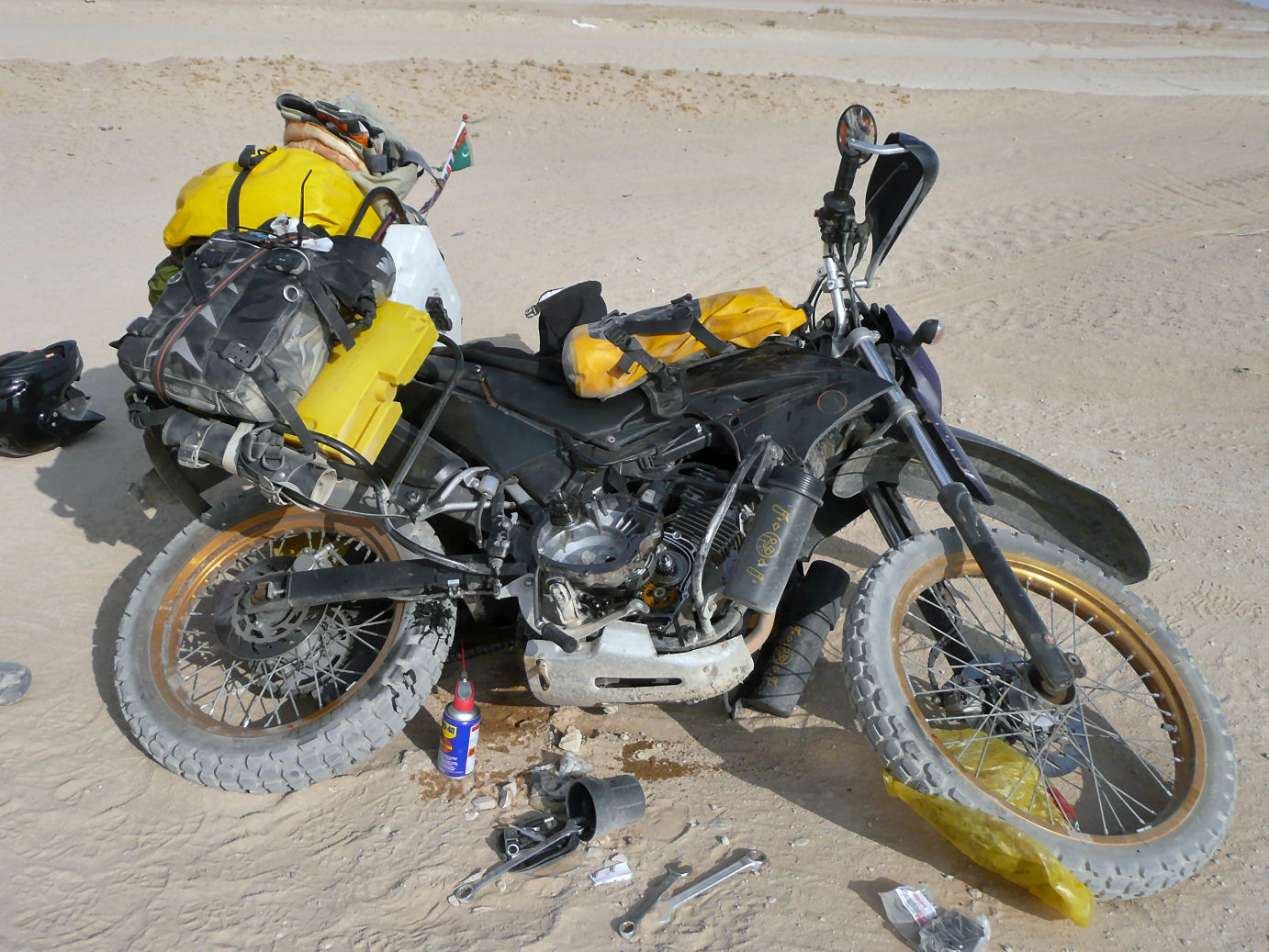 And this is when our first major problem arose.  My bike quickly got bogged down in the sand and the clutch burned out.  And we weren’t carrying a spare.  Fortunately we managed to pull the bike out and get it back to the campsite, and decided to try and get a temporary repair done in the morning.  In the meantime we went to the crater as night fell in local 4x4s – local drivers appear at dusk and regularly take people up there.  Be warned, don’t attempt it in anything other than a 4×4 or you will get stuck.  An amazing experience and I’m glad we made the effort.  I would have felt like Michael Collins on Apollo 11, otherwise.  All that way and not being there at the finish! 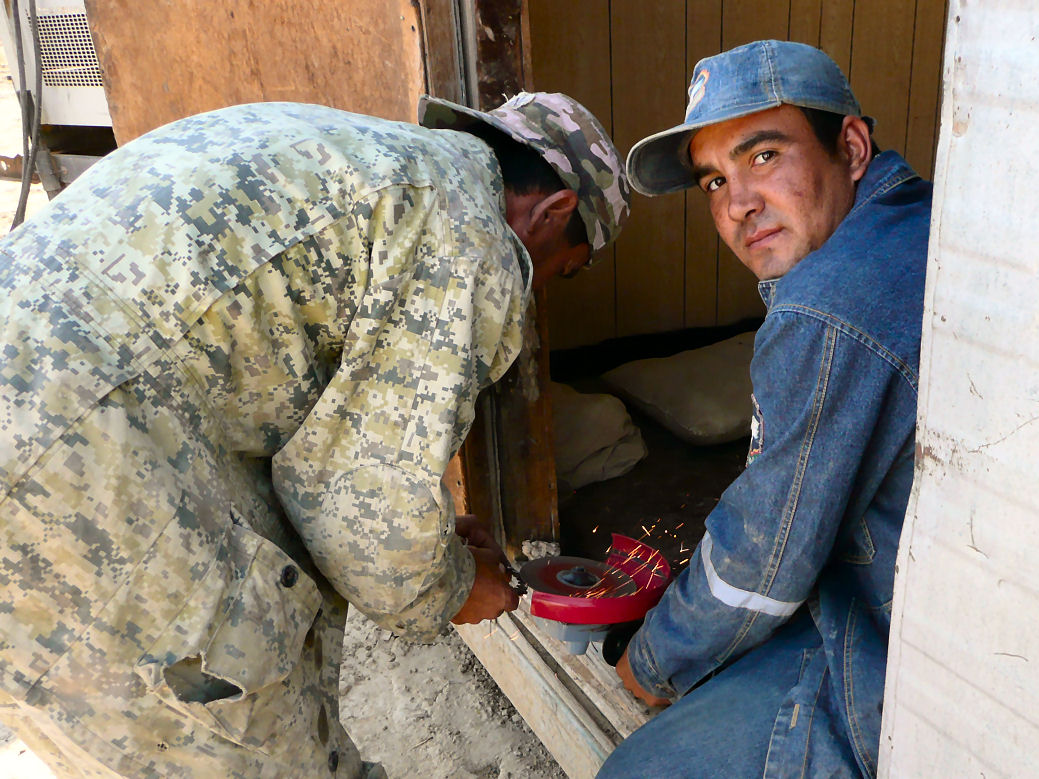 Woke at dawn and went with the Lithuanian team (who speak Russian) to a local roadbuilding outpost.  They did a temporary weld to the clutch plates and Kevin then refitted them.  In the meantime Team 2vagabondsandayak took some of my luggage to lighten the load – we agreed to meet them at our proposed stop, the Meros B& B over the border in Khiva.

After many hours of tortured riding we finally arrived at Dasoguz, the border, at 6:25pm.  The boredom was relieved by the regular police stops.  I amused myself, as soon as I realised they couldn’t speak English, by telling them about how my mother was a martyr to her piles and bunions, that the Queen’s corgis were eager to cock their legs on their shoes, as well as asking them why they had been posted to such a remote hellhole with no shade, no water and who on earth did they think they were going to capture there, as only a lunatic would consider such a journey?

Sadly the border had closed for the day at 6:00, but one of the border guards kindly led me to a local hotel, the Uzboy, where we could stay for the night.  It had positively the worst beds I’ve ever encountered, but the food was okay, fortunately.

Thursday 2nd August
We returned to the border at 8:30am for an early start, and were across, surprisingly, by about 11:30am.  Uzbekistan seemed normal compared to Turkmenistan, less surreal and with real people and houses bordering the roads, if you know what I mean.

Note: Turkmenistan is full of Toyotas, in Uzbekistan the Daewoo seems to be the weapon of choice.

We arrived at the Meros B&B in Khiva, and fortunately there was a room available.  I had keen to stay there ever since I read the book ‘A Carpet Ride to Khiva’ by Christopher Aslan Alexander.  Read it if you can (only available from Amazon, I think), a charming book and a moving account of a young British guy who works for an NGO and who helped set up a carpet workshop in Khiva to provide local employment and resurrect the traditional art of local dyeing and weaving.

So, the gameplan now is to get the spares required and to repair the bike.  They are not available locally as the nearest Yamaha dealers are in Russia, so we have arranged to have them sent by DHL from the UK to Samarkand, our next stop but one.  We can take our time in getting there as we don’t expect the parts to arrive before 14th August.

Oil consumption – just a bit of topping up.  The bikes seem to use less oil if ridden at anything less than flat out.

Breakdowns – 1.  Not terminal, but a real pain.

Items lost by Kevin – 0.  Kevin didn’t even lose his temper with the bike, which was pretty good, I thought. 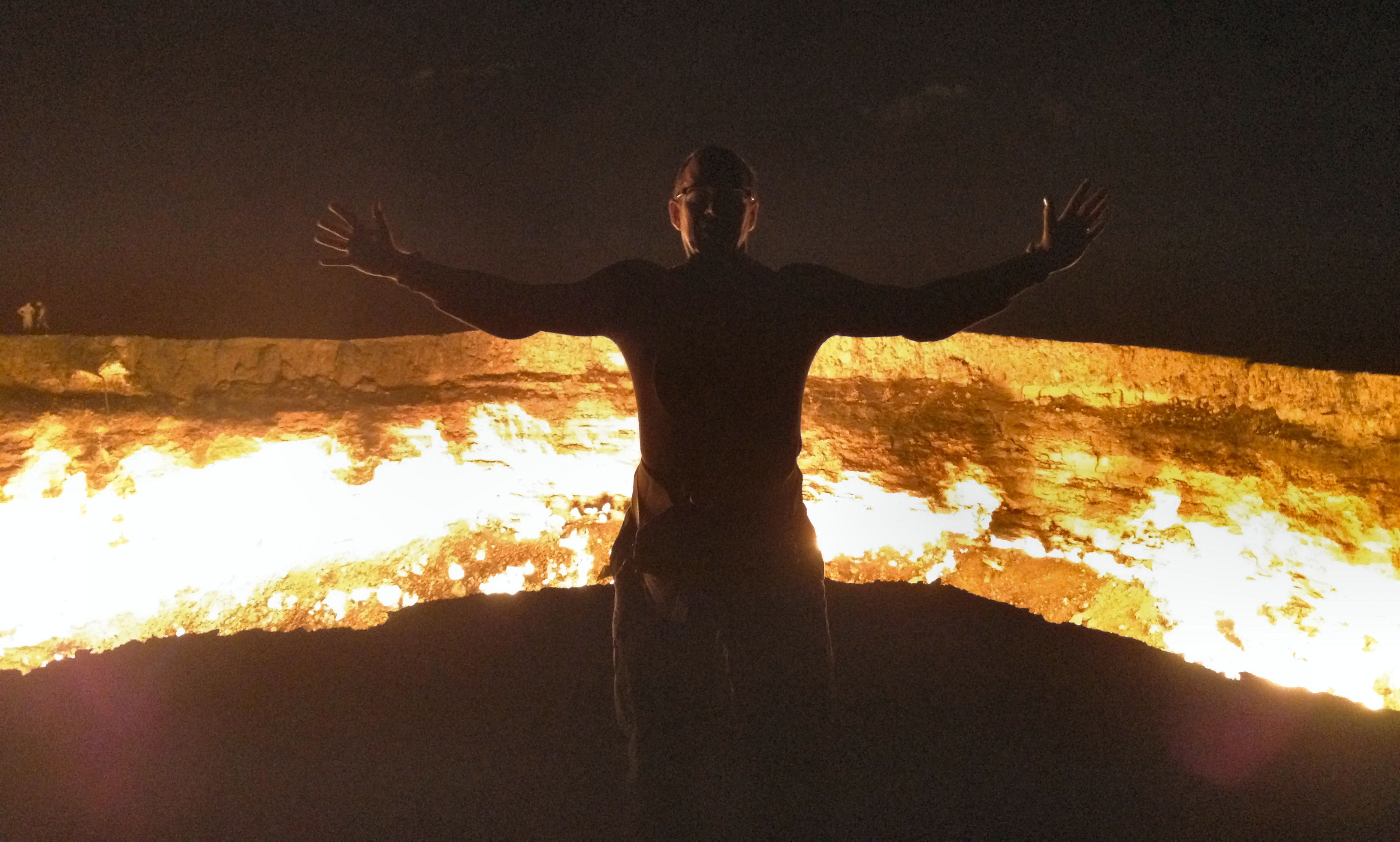 11 Responses to The Damned Heat, Carruthers