The ship is old and worn out.  The standard cabins on the second deck are internal, four to a cabin, bunk-bed style.  They are hot, noisy, and unpleasant.  The communal toilets are indescribable, with a constant emanation of noxious vapours.  Click on the flower to see the toilet, if you dare – I got the picture by lifting the lid with Kevin’s toothbrush.  But I warn you, this is not for the squeamish.  One fellow rallyer (who shall remain nameless) was so desperate (suffering as he was with diahorrea) that he used it anyway, hovering gingerly over the bowl.  The resulting splash back made him gag, and he unceremoniously vomited on the floor before him.  He was forced to clean himself up by having a shower in the public shower opposite.  Sadly his ordeal was not over as his diahorrea returned, and the entire process had to be repeated. 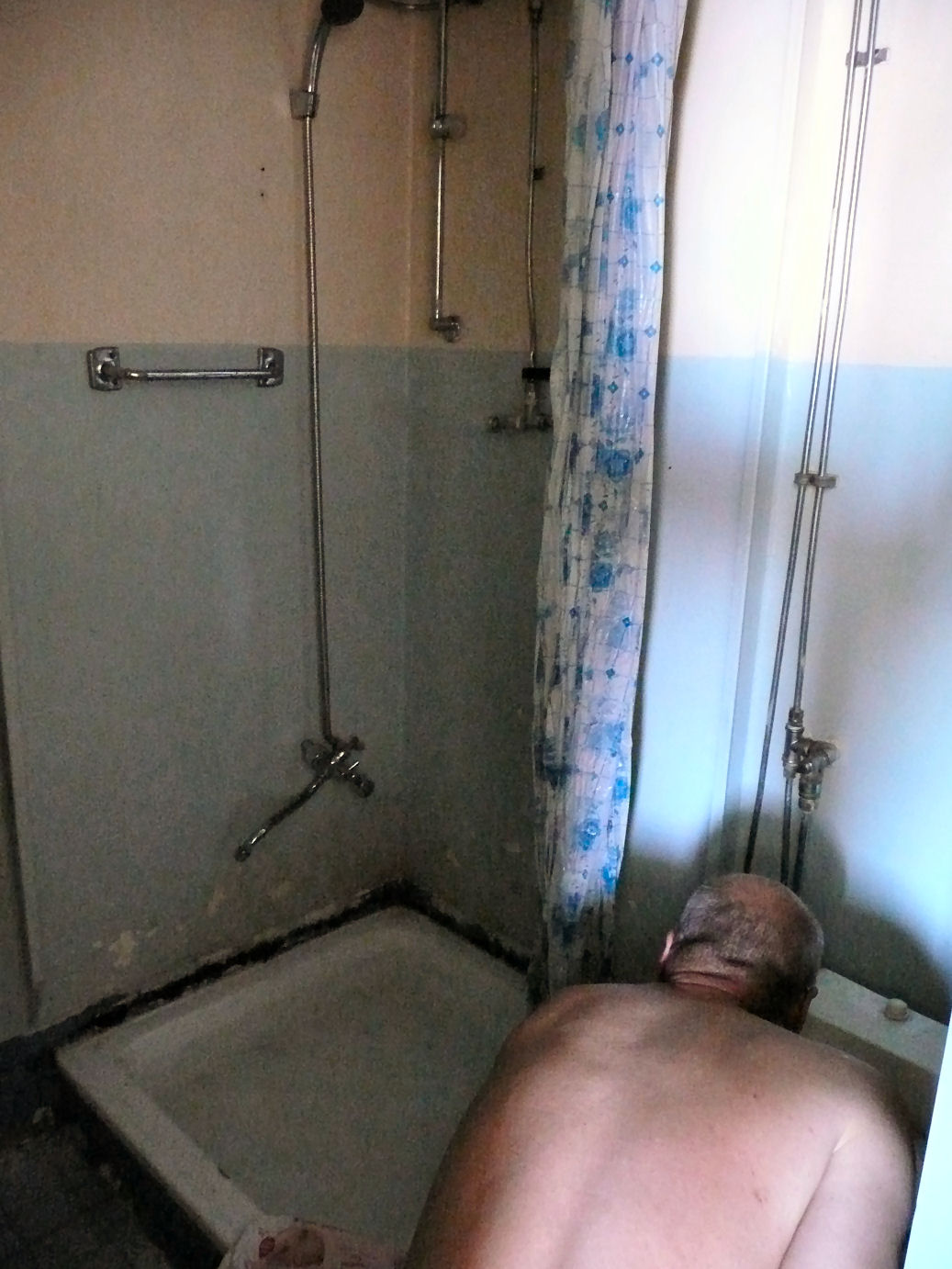 I decided that discretion was the better part of valour so I paid the Russian babushka overseeing the cabins $20 for a ‘superior’ cabin with a porthole, shower and toilet on deck three.  Once installed, and keen for a shower, I tried to turn it on.  Water issued from the mixer tap so I pushed the lever a few times, increasingly firmly, to divert the water to the shower head.  On the third push the tap ‘came away in me hands’ and hot water spurted in a raging torrent straight from the open pipe onto the bathroom floor.  Valiantly trying to staunch the flow with the shower curtain, I failed as the fabric was that rotten water kept bursting through.  Calling Kevin to assist, his endeavours merely resulted in the mixer tap falling off completely, so now there were two torrents of water and the bathroom was rapidly filling up with water.  In the end I had to fetch the babushka, whose steely glare seemed to indicate that I had ripped the tap off the wall deliberately, just to ruin her day.  The engineer came and after 40 minutes the water was turned off.  I never did get the shower, and I didn’t dare ask for a refund.

By the way, bring your own food and water.  This is available on board, but water is $3 a litre, and beer $5 a bottle.

Sunday 29th July
We finally arrived in Turkmenistan, docking at 7:00am and disembarking at 10:15.  There was a long queue for processing the entry formalities.  After completing 13 forms and paying numerous random taxes (including a ramp tax for driving off the ferry, and a parking fee for parking your vehicle whilst you were being processed) the last of us were free to leave at 9:30pm.

We ended up camping on a beach a short distance away from the port with another team, the Friengineers.

Monday 30th July
We had a bad night’s sleep due to the strong wind, the sand blowing into the tent and the noise of the goods trains trundling past on a regular basis.   I was up at 5:00am and we were off by 7:00.

It was a hot day and the road to the capital, Ashkabat, was mostly poor.  The heat along this edge of the Garagum (‘Black Sand’) Desert is surprisingly bearable, even at 40°C, but I was constantly thirsty and glad for the Pure Hydration backpack to take regular drinks from.  I had even used water from the tap on the ferry, with no ill effects.

We finally arrived in Ashkabat, at 7:30pm, a strange city described by some as a cross between Las Vegas and Pyongyang.  I especially liked the gold statues of Turkmenbashy (the former President who died in 2006) and the omnipresent policemen and street cleaners.  You will be amazed by the stunning, white marble buildings and revel in the glorious statue-filled roundabouts in the city centre.  Ashkabat is clearly the result of a megalomaniac’s vision, constructed with billions of dollars earned from his country’s vast gas reserves.

We went out for dinner at the British Pub with Neil and Helen of The Uncertainty Principle, but had to be back at the hotel (the Grand Turkmen) by 11:00pm, the curfew for foreigners.  Note: beer is $7.50 a bottle and the banks won’t take even slightly damaged dollar notes.

Oil consumption – just a bit of topping up.  The bikes seem to use less oil if ridden at anything less than flat out.

Items lost by Kevin – 1.  Kevin’s waterproof oversuit fell off the bike but was spotted by a following rallyer who stopped and returned it to him.