Sunday 22nd July
We set off at about 6:00am, and headed for Samsun.  We should have gone back to the main road, rather than make our way cross country, as the roads progressively worsened.  The detour cost us some time as it was midday by the time we got to the Black Sea coast.  Kevin had by now lost his watch, which was probably the last of his possessions, so he’s now travelling quite light!

Late afternoon we stopped in a town called Ordu, looking for a hotel.  We must have looked lost as some Turkish chap saw us and led us straight to his hotel (the Kervansaray) round the corner.  The room turned out to be hot, noisy and airless, so little sleep was had that night.  And does a muezzin always start the call to prayers at 3:30am during Ramadan, or was that just Ordu?  But we were given a 50% discount on the food on account of our ride being for charity, so a big thanks to Volkan Ince.  But it was still a hard time for us as there was no beer – Don’t forget, Ramadan!

Monday 23rd July
Bleary eyed and definitely not bushy tailed, we set off early but fortunately had good roads all the way to the Turkish border at Sarp.  This eastern part of Turkey on the Black Sea had a noticeably poor feel to it, although there were plenty of petrol stations.  We stopped at one and carried out our first oil change.  The Putoline oil is working well, and the engines still run sweetly, even after the hammering they’ve had for the last 2,500 miles.

As we’ve now come to expect, Kevin was stopped at the Turkish border, this time because his bike documentation was not in order.  He was fined 25TL (£9.00), reduced to 10TL (£3.50) after an argument.

I went through the Georgian border with no problem, but when I asked the border official where I could obtain some bike insurance, he shrugged and whispered conspiratorially, “I wouldn’t bother if I were you.”  I wonder if I can get away with this at home!

Suddenly we moved inland and the scenery changed.  Still very hot, but hilly and forested.  It was getting late when we stopped at a shop in some town and asked where we could get food and lodgings.   The owner ended up making us a meal from the shop’s provisions and afterwards directed us to a hostel about 500m up the road.  It was very basic but at least a roof over our heads and some fine views.  And we had a shower too, after the owner went out and bought a new shower head as the existing one was broken.

Georgia seems a pretty place, at least in the mountains, and welcoming too (everybody waves as you drive past) but no English is spoken.  My abiding memory is of the terrible driving and the cows wandering in the road.  Just like in India really.  And as in Turkey, the main mode of local transport appeared to be the dolmus (minibus). 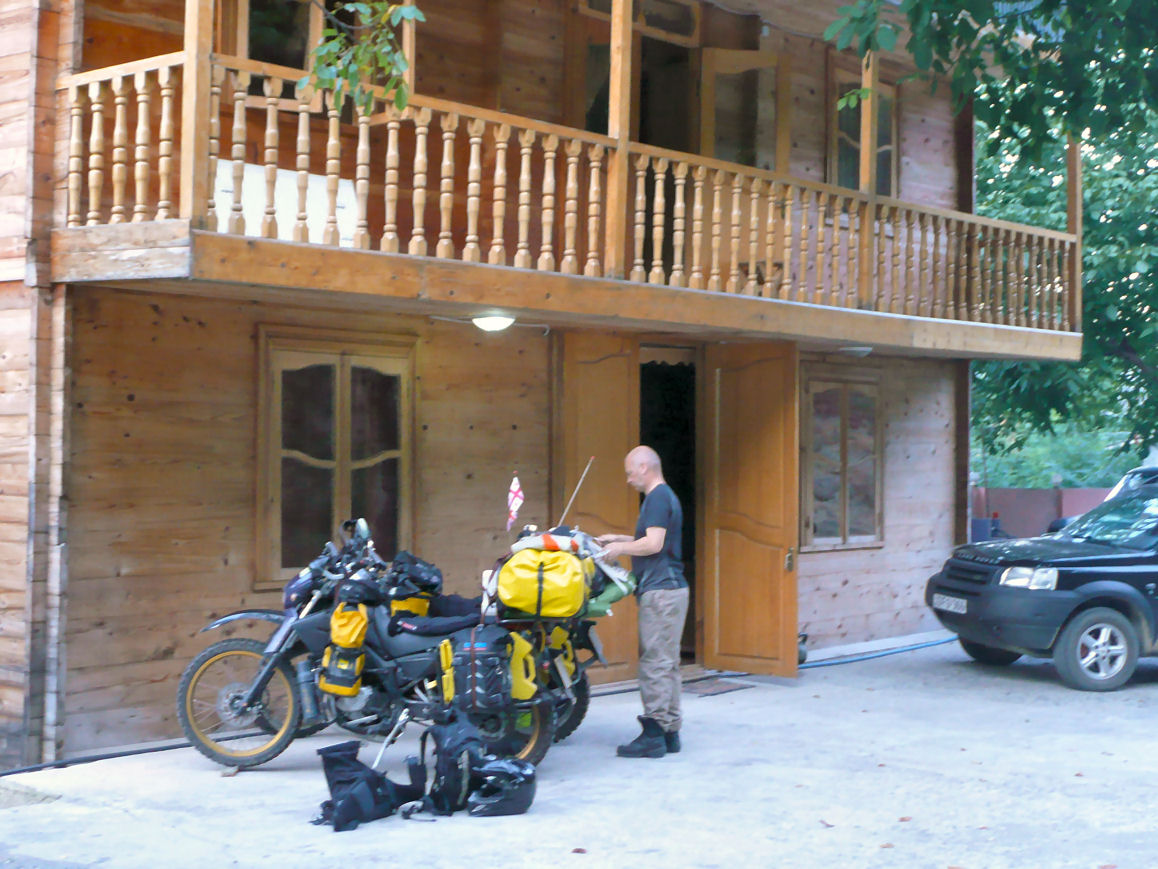 I broke the new shower head when it fell on the floor during my morning ablutions, so a sharp exit was called for – we were gone by 7:00am, with the money for our stay left on the bedside table.  The road conditions progressively worsened, and I realised why my route planning had suggested a more northerly (but longer) route as being advisable.  The unpaved roads (Read: rough tracks) lasted for about 80kms and took absolutely ages to negotiate (and wore us out to boot).  But probably a taste of what’s to come, I guess.  This turned out to be our longest day to date as we were 13 hours in the saddle.

We headed for our planned stop at the Kiwi Hotel in Lagodekhi, but couldn’t find it in the twilight.  Further up the road we saw a hotel sign and stopped.  The girl outside, who turned out to be from the capital, Tbilisi, was in town training the locals (in what I never found out), and fortunately she spoke excellent English and arranged  a room for the night, with dinner and breakfast, all for less than £40.  Highly recommended as clean and welcoming, with a lovely host, Irina Orujashvili – Hotel Kavkasioni, Vashlovani Street 136, Lagodekhi (Tel: 5 77 95  91 49; Grid: N41.84006, E46.28181)

There were noticeably fewer petrol stations in Georgia, and the fuel available to us was the usual 95RON as well as, for the first time, 93 RON.  We had actually filled up with 93RON once, with no ill effects.

Wednesday 25th July
After an enormous and varied offering for breakfast we set off at about 8:30am.  The Azeri border was minutes away and we crossed fairly quickly.  Interestingly we drove round the long queue of cars entering Azerbaijan and went to the head, without complaint.  I think we’ll be able to do this from at every border from now on as it’ll save loads of time and is, I understand, tolerated in Asia.

We saw our first dead cow lying in the road, apparently struck by a motor vehicle.  This is an unusual sight I guess.  I’ve never come across one in India during either of my two visits, the traffic seemingly avoiding them as they wander about languidly, swishing their tails.  I’d rather like to be able to say that I hit it, but the last time I did something similar it cost me six stitches and a leg that still irritates me on occasion five years on.

Yet another breakdown, this time Kevin’s clutch cable snapped. But we have a spare and it only took 20 minutes to fix at a petrol station, with all the locals gathering to offer advice and comment on our appearance. 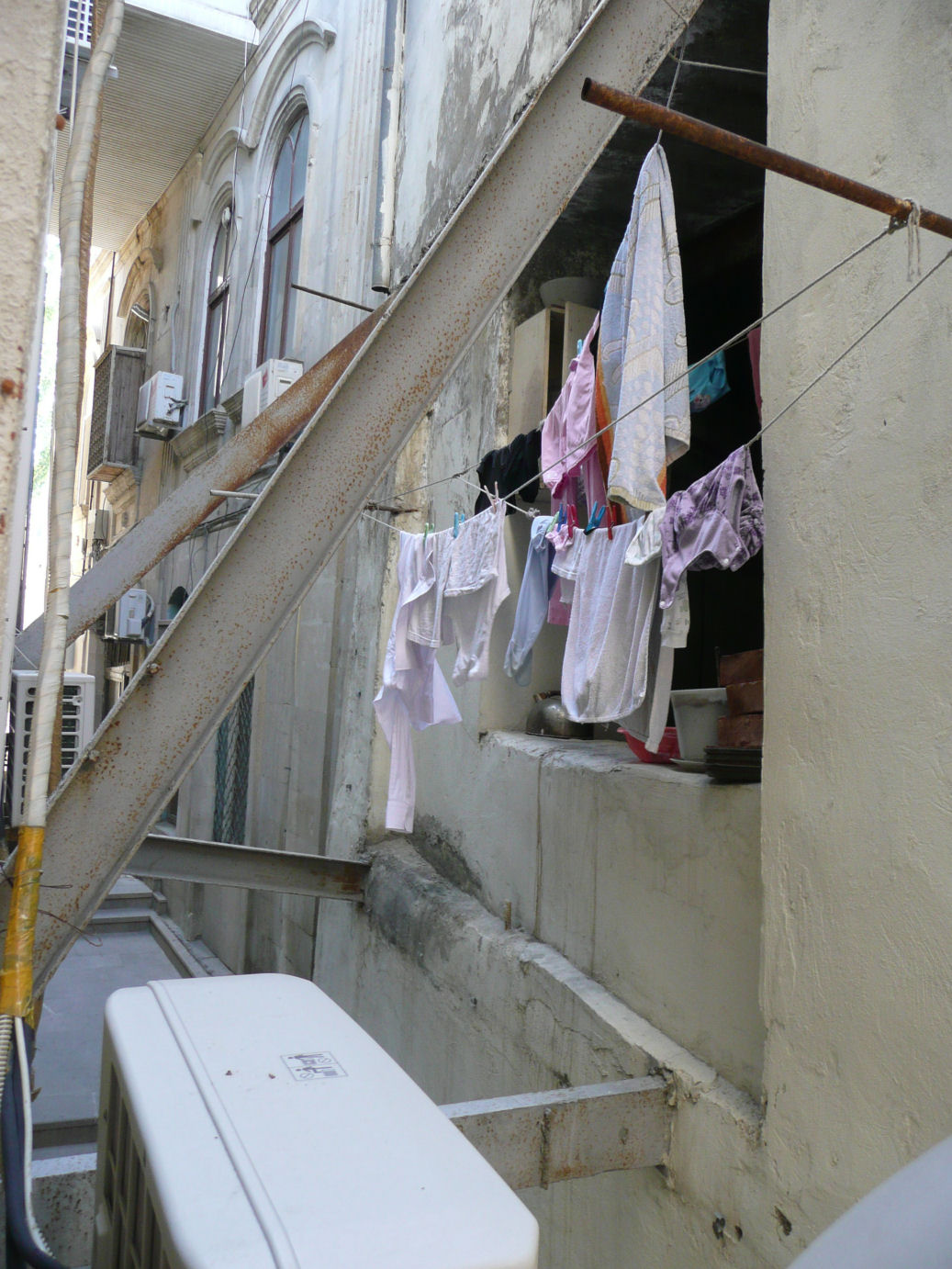 The roads for the last 20kms into the Azeri capital, Baku, were lined with sand dunes, a sign of what’s to come in Turkmenistan on the other side of the Caspian Sea.  Despite the obvious poverty in the rest of the country, the city is gleaming and vibrant, a visible sign of the country’s burgeoning oil wealth.  We arrived at the Old Gates Hotel in the old city at about 7:30pm, only by creeping round barriers and going the wrong way up one way streets.  The hotel is described by Azerbaijan24.com as a ‘small, cosy boutique hotel … All rooms provide the captivating view (sic) over the Old City as well as the Caspian Sea’.  They might.  I wouldn’t.  Its rooms are charmless and rundown, and worryingly there seemed to be no other guests.  I’m nevertheless looking forward to restoring our energies before we receive our visas and catch the ferry across the Caspian Sea to Turkmenistan.

Getting on the internet during the evening we received the alarming news about the current clashes in Tajikistan.  You can read about them on the BBC website here, but clearly due to the current instability of the region, Tajikistan and the Pamir Highway part of our trip is sadly now off, and we must go straight from Uzbekistan into Kyrgyzstan.

Thursday 26th July
Our day off in Baku, the city of Eurovision and the nemesis of Engelbert Humperdinck, started with a trip to the ferry ticket office and the Turkmenistan Embassy.  I will be writing on these later for those who need the detail of who, where, what, when and why, but suffice it to say that the city’s roads are in an upheaval of repair, with one way systems in place and total chaos reigning.  One way, by the way, means any way (‘cos in their eyes they’re only going one way, stupid), and traffic will often come the wrong way up the street towards you, and probably on the wrong side of the road to boot.  So be warned.

Kevin went to the local Yamaha dealer, on foot, the crazy fool, and managed to obtain his sorely needed gear selector return spring.  Now who’d have thought they’d have such a thing in stock?  And they took pity and gave it to him for free!

And finally, it appears that a worry of old has resurrected itself.  I had been concerned some months ago (from some motorcycling forum or other) that our bikes would only be allowed into Azerbaijan for a three day transit, and beyond that there would be a problem.  I had subsequently been reassured that this was not the case, and the rule only applied to RHD cars.  However, a French guy in the hostel down the road from our hotel had been in Azerbaijan for some ten days with his BMW F650GS and hadn’t been allowed onto the ferry without paying a fine of $25 as he had exceeded his three day limit.  His problem was he didn’t know where to pay the fine and no-one seemed to be able to tell him.  The answer for us, however, is to put the bikes into the secure customs compound in the ferry port until we leave.  Ah, bureaucracy….

Weekly Statistics
Oil consumption – 1 oil change (= 1 litre each) plus just a bit of a top up.  The Putoline NanoTech 4+ 100% synthetic oil is really working brilliantly in these harsh conditions, and as long as the throttle isn’t pinned for hours on end, the oil levels seem to remain constant.

Maximum hours in saddle in one day – 13

Breakdowns – 3  (Kevin’s gear selector bolt and gear lever return spring, one after the other, followed by his clutch cable)

Near Misses with Insane Motorists – 17

Days without Beer – 2, due to Ramadan.  It seemed like more for some reason.

Items lost by Kevin – 1 watch (really lost this time).  I think the greatly reduced loss rate is down to the fact that he now has no possessions left at all.

One Response to I Wouldn’t Bother If I Were You